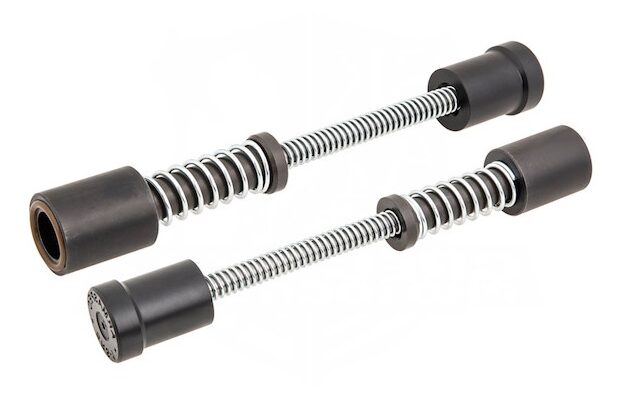 What You Need To Know About Buffers And Springs

Buffers and springs don’t sound too much like important parts of your AR, but like everything else in your bolt carrier group (BCG), if you didn’t have them, you wouldn’t be getting very far with your gun. Buffers and buffer springs are a sub-assembly within the buffer tube that mount within the BCG and help the smooth transition between fired round and new, ready to fire round.

Just as soon as you have fired a round, the quickly expanding gas from the spent round pushes the whole BCG rearwards. As this assembly group travels back under this action, the tail end of the BCG makes contact with the front of the buffer – the large flat portion that you can see formed on every buffer. When the BCG hits the buffer, and travels further to push it back, it compresses the buffer spring into its housing.

Once the buffer spring is compressed and the buffer travels back far enough, the force of the spring takes over and expands, quickly pushing the buffer and bolt carrier group forward once again into its initial position. As the buffer assembly moves forward moves forward under the action of the spring, it advances the BCG ahead into the upper receiver, stripping another round from the magazine, and stopping at the end of the buffer tube. Once back in position, it waits for the whole cycle to start again.

So, plainly, without the components of the BCG – of which the buffer and spring are a significant sub-assembly – the AR rifle wouldn’t work on automatic mode and you would have to feed each round into the chamber manually.

The importance of the group is obvious, but if you are building an AR, or simply engaged in swapping out some parts for custom items, is there any worth in addressing the buffer and spring, and how can alternative parts make your rifle even better?

How Can Buffers And Springs Improve My Gun?

First thing to understand is that there are ‘standard’ differences anyway; Rifle and carbine. Rifle length components are used when a standard A2 buffer tube is installed for use in a fixed stock weapon, and this extra length helps to fill the space in the longer A2 rifle buffer tube. The carbine buffer weights are used with most collapsible stocks that utilize a carbine buffer tube allowing for a shorter length. Before you start considering modifications, understand what you have in the first place.

You can tailor the function of the spring and buffer by selecting alternate parts, you can optimize gas delivery and overall reliability, but you have to pick wisely, otherwise you might end up decreasing performance. You also need to understand that these are only two components in the gas-ejection assembly, and other factors including barrel length, gas port size, gas tube length, dwell time, and the use of a suppressor. All of these elements affect the gas management, so just changing your buffer and spring might not bring about the changes that you want. However, if you are determined to change, the things that you can look at are:
Buffer Weight. Surprisingly, buffers are available in a fair range of weights, which can affect their response to the backward force of the expanding gasses. Typical weights are:

You can get heavier buffers than these, but they are mostly intended for pistol-build AR’s. If you want somewhere to start, try the H and work around until you find what suits you. So, what about springs to go with your buffer?

Actually, there isn’t a great deal of difference between the rifle and carbine springs, though the rifle spring is slightly longer and has a few more turns so that it delivers the same tension over the change in length. These come out as:

The majority of aftermarket springs use a spring tension weight that is around 10% larger than the normal spring and they will be labelled as being different from the standard versions.

What is worth looking at when selecting a spring though is the range of different finishes and manufacturing methods that help smooth the transition of the spring in the buffer, and make it smoother under different firing conditions. The AR is renowned for its characteristic ‘twang’ sound that results from the standard spring resonating in the standard buffer tube. While this isn’t usually too much of an issue, it can become quite noticeable if you are using a suppressed weapon, and can be fairly annoying if you are doing a lot off rapid firing.

There are several companies offering specially ground springs and buffers that help reduce this resonance though they might not get rid of it completely, while others opt for increasing the tension in the spring a little by offering an alternative version. Either of these solutions can be quite effective at reducing twang, but are unlikely to remove it completely.

When you decide to build your AR Rifle from the Lower Receiver; don’t forget to explore how the small, but important details like buffers and springs can help to make your rifle customized just for you.