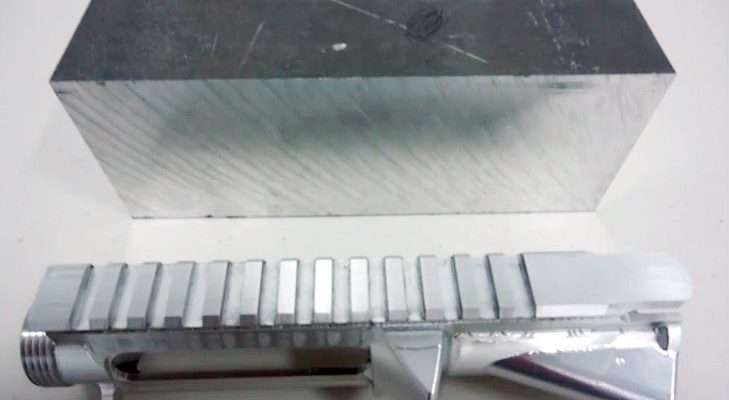 There’s little doubt that aluminum is the best material when it comes to AR lowers. Whether you get them in complete or as 80% finished to polish-off yourself, aluminum gives you the confidence to use your AR to its fullest extent without fear that it will under-perform. Due to its density and ability to resist corrosion, aluminum is used in many applications across a myriad of industries. Aluminum has become known as a vital component to the aerospace and transportation sectors along with being the ‘go-to’ alloy for manufacturing. Aluminum is also used extensively in many gun parts, due to its combination of light weight and relatively good strength.

However, aluminum as a metallurgical material is actually available in several different base forms, and the physical differences between these forms can have a huge impact on the resulting component. The main forms available are:

Cast metal has been heated up past its melting point and poured into a mold, using one of a number of techniques such as gravity or high pressure die casting, to form the shape of your desired product. It is then allowed to cool, giving a fairly amorphous crystalline structure.

Billet is a form of material and doesn’t necessarily indicate the manufacturing process of the final product and is usually described as being in an ‘as delivered’ product. Billet metal is a solid length that has typically been extruded into shape, either by continuous casting or hot rolling. This gives a better crystalline structure than with cast material.

Forged aluminum is heated up until it is malleable -though not molten – and forced into the desired shape, generally using the drop-forging process, which is a high-pressure stamping technique. Because the material is made to flow into its forged shape, the crystalline structure is much more superior to either cast or billet material, however, that comes at a cost.

Billet material is not a manufacturing process itself, but is simply a form of material. Such as ingot, nugget or round sections and is often used for CNC machining products because it produces high quality, high accuracy parts without the need for expensive tooling. This makes it exceptional for low quantity or made-to-order work that doesn’t need to be produced in large numbers to be cost-effective. Forged parts may be the most expensive to produce, but the flow of the material makes the part the most rugged and able to put up with rapid heating – such as a weapons system under sustained load of automatic fire.

So aluminum is available in several different forms, but which is best?

Well, much of that answer relies on the criteria by which you are measuring it. If you are interested in lower costs then cast materials may be the best for you, while if strength is your main concern, then you may be more interested in forged material. But these represent extremes of material form, and most users find that it is best to compromise on both elements and pick the middle ground where cost isn’t too high, but the actual structure of the material is sufficiently well formed to ensure that it is unlikely to fail under the possible temperatures and pressures of automatic gunfire.

This means that billet aluminum represent the best mix of properties for a lower receiver.

Because billets are usually formed by either rolling or extrusion, the crystalline structure of the material becomes aligned, creating a strong material regardless of the orientation of those crystals in the final product. Extrusion or rolling are also much cheaper to run processes than forging, so costs for these materials tend to be lower, making them much more attractive as the base materials for AR lower receivers.

80% finished AR receivers are now available in a number of materials and forms, each with their own attributes, so if you are keen to build your own one, make sure that you choose the one that is right for your needs and shooting style.

Previous: 3 Benefits Of Using A Jig For An 80 Lower
Next: What’s An AR-15 Pistol Lower?