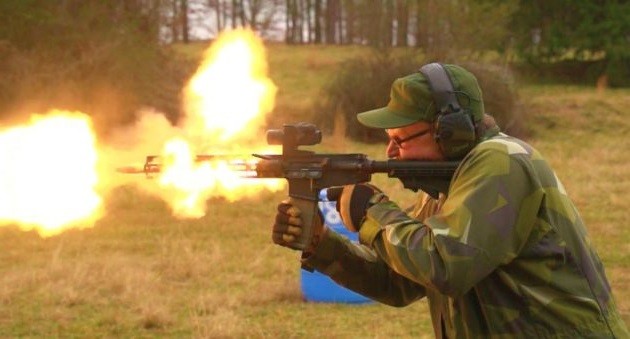 Why Your AR Overheats, and How to Stop it!

There is little more annoying that an overheating gun in your hands; you want to try and zero in on another target but you end up playing ‘hot potato’ with it instead! What can you do about it?

The AR was conceived as a military rifle and in that capacity would be expected to undergo sustained firing rates, and that is going to heat up the mechanism and barrel fairly substantially – it’s the nature of the beast. The good news is that despite your AR getting seemingly hot to the point of damage, this is unlike the bolt-action rifles that you may have been brought up on, and will take huge amounts of heat without too much ill-effect. With that said, if you put less than a full magazine through your gun and it starts to get unbearably hot, you may want to get it looked at by a professional since that just isn’t right.

The AR is a gun that has been designed for heavy usage, and will take a good rate of fire all day long but, of course, this will lead to barrel wear and you’ll have to replace it after around 20,000 rounds. But you can get less heat transfer and more life out of your barrel by fitting a chrome-lined barrel to cut down on heat transfer and ultimately get more life out of your barrel.

Let’s get one thing straight; serious overheating is hard to achieve in a weapon like an AR15 or 10, and to do it you need to keep throwing magazines into it, and that really amounts to abuse, so don’t be surprised when it gets a bit warm. Many manuals state that an AR15 in standard form can sustain a rate of fire of only 12 to 15 rounds a minute. They also tend to warn that as few as 140 rounds fired off quickly can cause the rifle to “cook off” or inadvertently fire off a round from the latent heat of the system only. However, under normal circumstances, your AR will perform just fine, but if you are still worried about heat build-up, there are other areas that you can look at.

Plainly, your handguard helps you deal with heat as it keeps your hands well away from the actual barrel, but handguards are not all the same and some are better at dealing with heat build up than others. Getting rid of heat is all about form and ventilation, and there are a range of different handguards out there that are designed to optimize heat. Choosing something with lots of vents will maximize the surface area of the handguard and help get rid of all the excess heat. Darker colors also absorb heat so get something dark grey or black for extra help with heat.

Look at your caliber.

The heating of the rifle is caused by all those explosions in the breach so you might think that a larger caliber is going to cause a bigger explosion, and more localized heating. While that might be the case, larger calibers have a much higher recoil and don’t lend themselves to high rates of fire, so heating is not usually a problem. In fact, the reverse tends to be true and smaller calibers like the standard .223, the .224 Valkyrie, or even a .22 LR reduce the recoil significantly and make for higher rates of fire. Don’t try high rates with a .308 or larger though.

Get a forward grip.

It might not help with the overall heating of the barrel, but a forward grip can at least keep your hands from getting burnt by the hot barrel.
Get a heavier gauge barrel. A larger mass of barrel will take a lot more heat and prevent the whole system from overheating. The downside is that a larger barrel can take longer to cool down too.

Generally speaking, overheating isn’t really too much of an issue with AR Rifles. The best solution of course is to just stop pulling the trigger so fast, and make every shot count instead! Treat your gun well, and it will be there for you when you really need it.

Previous: What’s The Best Barrel For Your AR?
Next: Solutions For AR-15 And .308 Rifle Upgrade Problems