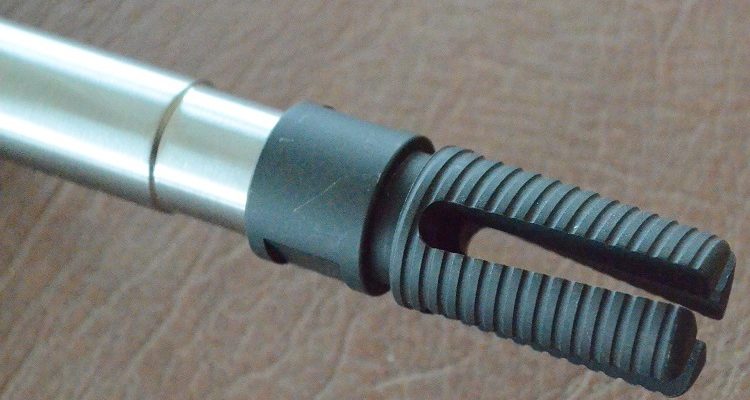 Round Up of AR Rifle Muzzle Devices.

With all the work seemingly happening way down the line, a lot of AR aficionados don’t consider the benefits of the muzzle devices, and in doing so do themselves a huge injustice. Well, we’re going to level that particular field.

Muzzle devices have the potential to add measurable benefits to your customized rifle, and different ones depending upon what you have designed your gun for.

They come in three specific types:

This type of muzzle device is designed to reduce the felt recoil, and mostly employs side vents to dissipate some of the bullet energy.

reduces the vertical movement and is much like a muzzle brake. They are constructed with holes on the top to redirect movement.

This device effectively reduces the fireball when you fire a round, but rather than hiding the flash from an observer, it is intended to reduce any flash seen by the rifle user, making it easier to line up a second shot quickly.

These three devices are all simple in operation, but can have a huge affect on how you use your weapon. The muzzle brake and the compensator devices are generally fairly small, being roughly the same diameter – or close to it – of the barrel and with a number of holes through them.

The flash eliminator is usually larger in diameter as its role is to burn or ‘flash off’ any un-burnt propellant powder while the round is still essentially in the confines of the barrel. Let’s have a look at both of these types of devices in more detail.

Okay, so these two really are much the same thing in their form and operation. One (muzzle brake) releases a little of the rounds energy early in a sideways direction, while the other (Compensator) releases it in either a vertical or all directions simultaneously. The idea behind this is that the muzzle brake prevents the gun from kicking up dust below the muzzle and potentially revealing your position. The point of these devices is to take a little of the kick out of the firing action, allowing the shooter to get back on target quickly. However, there is a subtle different between these;

This makes both of these devices a means of control rather than concealment.

Sometimes called a flash suppressor (as opposed to a sound suppressor or silencer) these do exactly what their name implies. By having a slightly larger bore than the barrel, and with integral holes that allow the burning of excess powder while the bullet is still effectively in the gun, and reduces – though doesn’t completely remove – the flash of the round going off. While many people think that the eliminators role is to prevent the shooter being seen by enemy combatants, the intention is actually to prevent the shooter being momentarily blinded at night, allowing them to get back on target quickly.

The AR-15, particularly when chambered for .223 rounds, doesn’t have heavy recoil anyway, and so there is a market for hybrid devices that try to do a little of everything. This is particularly true of muzzle brakes and compensators which are often found in hybrid form. Less so with flash eliminators because they perform a different task.

On a legal side, Californians – or rather the State Government over at Sacramento – hate flash eliminators, while they totally misunderstand and believe them to be a device that hides the flash of a round going off from everyone, not just the shooter. And so, in the spirit of misunderstanding, flash eliminators are banned in that particular State. If you were hoping to use one in the State, forget it.

Previous: How To Make Your AR-15 California Compliant
Next: Finding The Best Upper For Your AR15, .308 Rifle