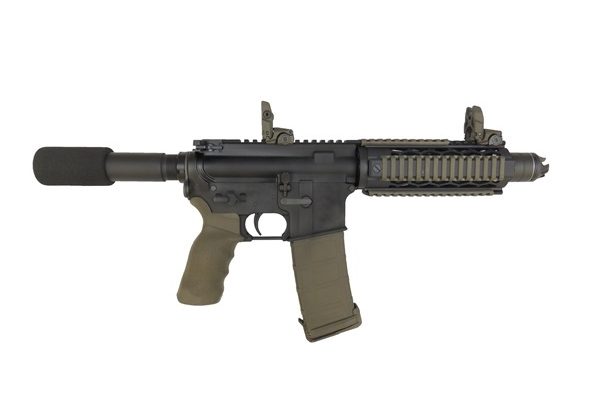 Yep, that’s right, you heard us – an AR pistol! The idea is that you take an AR-15, cut out any unnecessary or parts that stick out too much, and rebuild it with a prominent pistol grip and no carrying handle. Actually, it’s a bit more involved than that, but that is the essence of the process.

The first question really is, “why would anyone want a pistol based on an AR-15 anyway”? and that’s a good question. The fact is that, apart from the standard answer of “because they can”, there are actually many reasons why someone would want to build such a beast. The main one being that it is actually a hell of a lot more convenient and safer than trying to handle a short-barreled rifle (SRB) in a tight situation. They are lightweight, compact and easy to shoulder, and are easily configurable like their rifle counterparts. And because you can effectively shoulder them, you can carry your AR-15 pistol without any concern for the ATF knocking at your door.

But how does an AR pistol stack up with the law? Actually, pretty well, particularly if your intended endgame is to end up with what is essentially a short-barreled rifle, albeit one minus a traditional stock. As you probably know, if you fit a basic AR-15 platform of any caliber with a barrel that is shorter than 16 inches, together with a fixed stock, it becomes identified as a short-barreled rifle, and that is legal to own in most states but requires the user to go through the NFA process, register the weapon, and pay a $200 tax stamp.

Not everyone wants to go through that process, and converting an AR-15 to be a pistol allows the user to have a barrel shorter than 16 inches, without having to go through needless NFA red tape. Furthermore, some states – notably Washington, New Jersey and Alabama – don’t allow short-barreled rifles under any circumstances, so the only way to own something with a shorter barrel is to opt for an AR pistol.

But the ‘pistol’ still delivers a recognized rifle round, fed from a rifle magazine, so how can it be a pistol?

The classification comes down to an interpretation of a measurement by the ATF, and whether a ‘stabilizer’ such as a stock, counts in overall measurement. The ATF have determined that the stock is an essential element of a weapon that is intended to be fired from the shoulder – such as a rifle or a shotgun – while stabilizing braces are simply an accessory.

There is also the issue of a vertical foregrip. The ATF determine that a pistol, among other things, can be held (and used) in one hand, and the addition of a vertical foregrip implies that the weapon is going be held in two hands – making it a pistol no longer. So, by ensuring that it complies with these two elements, and that the resulting weapon is no longer that 26 inches overall, you have yourself a pistol, only one that fires like an AR-15!

So, having piqued your interest, how to go about making one of these small but potent beasts?

When building an AR-15 pistol you cannot convert a rifle into a pistol, so you cannot take your existing rifle and turn it into a pistol since there are numerous fundamental differences. So, rather than strip down your AR-15 and try to butcher it, it is always best to start from first principles and make something new. you’ll need to start with an AR-15 lower receiver. A receiver is now just sold simply as a receiver, and is not specifically cited as a pistol or rifle receiver, so you can purchase any receiver to turn it into a pistol. If you are interested in using an 80% lower receiver the federal law permits it and you get more of a sense of achievement too.

You can fit a KAK Shockwave Blade Pistol Stabilizer, a SIG SBX Pistol Stabilizing Brace, or even a Thordsen cheek rest, all of which help you steady the gun. Remember, you cannot fit any kind of stock that you can shoulder or the weapon becomes a short-barreled rifle according to the ATF, but there are many different things that you can do with the back end to help stabilize it.

What you can’t do to your AR-Pistol build

You also can’t, under the ATF definitions of a pistol, have a vertical foregrip, but that doesn’t mean that you can’t fit something on the front end to help steady it, and you can fit and use an angled foregrip instead. The Magpul angled foregrip is completely legal to use on a pistol and can greatly increase stability.

When the AR-15 pistol first appeared on the market, it was treated with a reasonable level of disdain. Many failed to see why you would want to take an excellent rifle, chop it down and in doing so muck up its accuracy and the delivery power of its rounds. The pistol modification also increased recoil, the muzzle flash and, subsequently, the overall noise. But despite these issues, the AR pistol showed that it had legitimate uses, and with its ability to be concealed was more than a curiosity.

Judging by the interest in AR pistols, and the number of kits available on the market, this isn’t something that is going away any time soon. If you don’t have one yet, you should check them out. Being small, proven, and rugged; they’re a must-have for any gun lover’s collection.

Previous: Which Is The Best Aluminum: Billet, Forged, Or Cast?
Next: Get The Right Lower Parts Kit For Your AR