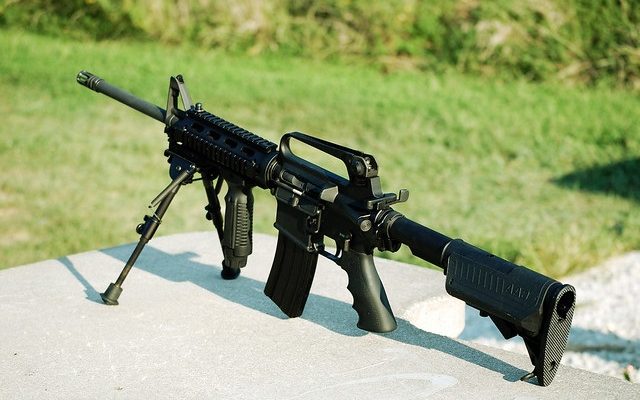 Unless you want your AR specifically for close combat operations, it always makes sense to get a bit of added stability to it by adding a bipod to the front end. Sure, some people will tell you that you can use anything in your environment – vehicles, foliage, other people’s shoulders – as a means of stabilizing your shot, and a bipod adds weight that you can do without, but undoubtedly, if you want to stabilize your shot, a bipod is the way to go.

And the usual mental image of a large, heavy and unwieldy bipod is a thing of the past too; many of today’s examples are smaller, and more discrete than those of yesteryear, and also off far more features. The upshot is that these are now useful, usable, and lighter units that rarely get in the way and can only add quality and precision to your long-range shot. It’s almost like not getting a bipod would be nuts!

The name ‘bi-pod’ is derived from ancient Greek, where bi means two and pod means foot, so the name quite literally equates to two-foot, and that is what you get for your money. The use of rifle bipods stemmed from the early days of cameras where a picture could take several minutes to of open lens to take, and the need for steadiness was apparent. Bipods were originally adapted versions of the camera tripod and added similar stability. These two-strut devices usually fit towards the end of the handguard or to the barrel of your AR and help form a stable triangle with your shoulder in the stock, increasing balance many-fold.

A bipod can counter all manner of issues when you are placing a long shot, including adverse environmental factors like wind and the small movements that our bodies unconsciously make, giving you a much better chance of putting that log range shot exactly where you want it to go. They also help you stay on target to line up a subsequent shot, should you need it.

While early versions of the bipod were typically a couple of joined and fixed-length rails that clamped around the barrel, todays versions are streets ahead in features and usability, and become a fully-fledged part of the gun rather than a hindrance when easing your way through thick bush and no one wants that!

The latest bipods are packed full of features that make them highly desirable, and unless you are going to be using your pistol-length AR in close combat situations only, then a bipod is worth spending money on. But even those intending to use their weapon as a close combat gun may find that they too have occasion where they need a steady shot, and a bipod beats having to steady your AR barrel on your buddy’s shoulder!

Most of the ‘standard’ systems available follow a similar format; they consist of two legs with rubberised feet for added grip on different surface types, and adjustable legs to allow for less than flat surfaces. You can alter each strut independently so that you can still have the rifle on the level whatever the surface you are resting on.

The standard systems also come in a range of basic heights, so you can pick something that will match your needs. Because these types of bipod fold up to lie parallel to barrel when not in use, they are never in the way, regardless of your environment, and if you need to track a target, then there is no problem as a simple swivel lets your rifle move with your target.Generally, standard bipods have a picatinny mount with a QD lever for quick and easy fixing.

Foregrip bipods are a combination of a foregrip and a bipod, and are deployed from the foregrip. These are standard issue for military personnel who may need to rapidly transition between standing and prone shooting positions. However, for as cool as they may look, they are not a very good option for long range shooting – such as sniping or target shooting – because they have limited features.

Not strictly a bipod, but we need to discuss them, as they are a pretty handy option. Akin to a shooting stick, this kind of pod is quite useful if you want to quickly zero in on a longer-range target and need some steadying. The height is usually adjustable, but they tend not to be on a swivel mount so if you need reposition, you will either have to physically do that or rotate on the surface that you are resting on.

When choosing a bipod (or monopod) for your AR, you need to consider a few other issues and factors too. Top of the list is the calibre that you are using. Standard bipods are fine for many smaller calibers but if you are putting something larger down the barrel – like the .350 Legend, the .458 SOCOM, or even a .50 round – then you may find that it just isn’t stable enough, particularly if you are firing quickly.

You might also want to think about the durability of your bipod. Many are fully-plastic components, which work in most cases, but if you need full durability you might want to consider a partially or even fully metal job, since they should be tough enough to withstand the wear and tear of life.

In picking a bipod, you need to consider all manner of factors, such as how you are going to be using the weapon and how often you need to set up a steady shot. A bipod can be your friend in many long-range shots, but can also be a handful if you need lots of mobility or concealment. Choose wisely.

Previous: What You Need To Know About AR Rifle Stocks
Next: Should You Buy or Build an AR Lower Receiver?