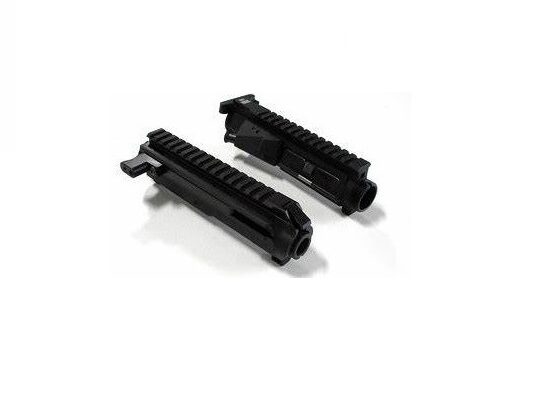 The Armalite AR family of rifles is one of the most popular rifle designs on the planet, with the primary versions being the AR-10/AR-308 variants and the AR-15/M16/M4 lines. The major benefits of the designs are the modularity and ease of use they provide.

Caliber conversions are nothing new to the AR style rifle and the heart of these conversions is the upper receiver. We’re going to go over some of the major upper receiver styles you will encounter when building your rifle.

The earliest recognized rifle in the AR family tree is the AR-10. This rifle is chambered in 7.62×51 NATO or .308 Winchester. This has resulted in modern renditions of this style of rifle being referred to as an AR-308 due to .308 being the more popular cartridge.

This differentiation is used to separate the original AR-10 pattern with its descendants. The original AR-10 upper receiver features the built in “carry handle” design. This carry handle is actually there to protect the top mounted charging handle which makes early or retro style AR-10 uppers incompatible with the standard AR-308 charging handles.

AR-308’s will feature a strip of Picatinny rail on the top of the receiver (referred to as flat top receivers). You are more likely to encounter an AR-308 than an original or retro AR-10 for a .308 build. This is because the flat top allows for better mounting options for scopes and other sights.

The AR-10 receiver will have the center line charging handle, carry handle/rear sight, no forward assist, and no brass deflector

The SR-25 is the bridge between the original AR-10 and the modern AR-308. Knights Armament would bring Eugene Stoner back to work on improving the original AR-10 pattern receiver. This would result in the addition of the brass deflector, forward assist, and flat top design.

The AR-10 and SR-25 feature a diagonal cut at the rear of the receiver. This means they can share lower receivers and be swapped out as desired without any hassle.

This version of the AR-308 features a different cut near the rear of the upper receiver. This more rounded design makes it incompatible with lower receivers cut to accept an SR-25 or AR-10 style upper.

The LR-308 requires a different buffer assembly, gas tube, bolt carrier group, barrel nut, and magazine catch. Essentially anything that allows the gun to run properly cannot be swapped between an LR-308 and a standard AR-308/AR-10

The AR-15 is the more popular descendent of the AR-10. Chambered predominately in 5.56×45 NATO, its variations are found extensively in military, law enforcement, and civilian circles.

Like the AR-10, the AR-15’s upper receivers have gone through multiple variations, eventually settling on a flat top upper receiver. Older variations are still popular for retro builds and reenactments, so knowing the differences can be important for historical accuracy.

This style of upper was first issued on the M16A1 and features a two-position rear aperture built into the carry handle. This rear sight would have windage adjustments but no elevation adjustments

The carry handle would feature a small hole for mounting early magnified optics and red dots. This would be the standard upper receiver through the early attempts to shorten the rifle such as the XM4 and CAR-15 XM177 trials.

Another distinguishing feature is the tear-drop shaped forward assist. This was found to hang up on equipment and would later be changed on newer uppers.

The M16A2/A3 upper would feature a handful of improvements. The rear aperture would now be able to be adjusted for windage and elevation. The carry handle mounting hole would remain present for now, and the forward assist would be made more cylindrical.

A brass deflector is also present to reduce brass related injuries and to provide the user with a better shooting experience. In terms of functionality the A2 and A3 variations are identical. The only reason they are different is related to the firing mechanisms for their respective rifles. The A2 features a burst setting while the A3 features a full-auto trigger pack.

Using this upper receiver will not provide either of those functions, but does provide a more precise aiming option for your iron sights.

This style of upper receiver is the most common on the market today. It is found on both the M16A4 and the M4 series of rifles. It would include all of the previous generations’ improvements but would be the first to not feature an integrated carry handle/iron sight combination.

Instead it would have the Picatinny/1913 rail system on the top of the receiver. This allowed for modern optics to be used with the rifle. If you prefer the carry handle sights, a Picatinny compatible version can be acquired for use with these types of receivers.

However, you will need a front sight block mounted that is compatible with carry handle sight height. Many modern manufacturers are now featuring continuous or semi-continuous Picatinny rails along the handgard of the rifle. This means less rifles will have the appropriate front sight for your carry handle, although compatible versions are still widely available and produced.

Another version of the AR style upper is designed for use with pistol calibers. Pistol caliber carbines (and some submachine gun variants) were developed using the basic AR upper with simplified features.

These designs tend to use a direct blowback system instead of the standard direct impingement system. This means there is no need to direct gas back to the bolt in order to cycle the firearm. That means no AR gas system parts are compatible with pistol caliber uppers.

These styles of uppers omit the forward assist and some versions are shorter overall than the standard AR-15 receiver. This is due to the shorter bullet length, but these uppers are still compatible with AR lower receivers.

Previous: Install Instructions For AR-15 Lower Parts Kit & Buffer Assembly
Next: What Is The Difference Between An AR10, AR15 And An AR9?

Bulk Pricing is Back! Buy More, Save More! Dismiss